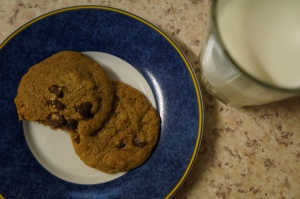 I was experimenting with a recipe for chocolate chip cookies on the weekend, and bought some into school for some of my friends. They declared they were absolutely the best ever cookies (or biscuits) they had ever tasted.
These cookies are ultra super-duper soft and fudge- and chewy.
I had a lot of trouble with the times. I ended up putting all of them back in (I had to bake them on four different trays, two at a time), so the times are a bit iffy. If you bake them longer, they should get a tad crispier, but because of the nature of the ingredients, they really should turn out fudge-y and chew-y.
Also, they’re literally so soft they’re sticking together XD Try storing them in an air tight container, separated by baking paper.
So, here’s the recipe 🙂

150g melted butter (I just melted mine in a mug in the microwave)
100g brown sugar
60g white sugar
1 1/2 tsp vanilla (Feel free to add some more or less depending on taste, I just poured a drizzle in, personally)
1 large egg (preferably at room temperature, so get it out of the fridge first)
235g plain flour
1/2 tsp bicarbonate of soda
1/4 tsp salt (if you like yours salty, add a bit more, this is purely for flavour)
1 1/2 tsp milk
200g chocolate chips (I used dark, but milk or white would work great as well. So would things like sultanas or toasted nuts)

In a large bowl, mix together the melted butter, brown sugar and white sugar, using a whisk, until it’s fairly smooth.
Keep on mixing, and add the vanilla and egg, and mix them through as well.
Measure out the flour, and sieve it into the mixture, with the bicarbonate soda and salt.
Mix with a wooden spoon
Now add the milk and the chocolate chips. Mix it until the milk is well incorporated and the chocolate chips and pretty evenly dispersed, folding the mixture to spread them out.

Cover the bowl, and refrigerate it for approximately 2 hours.
Pre-heat the oven to 170 degrees celsius fan-forced.
Line a few baking trays with non-stick baking paper.

With a teaspoon, place small mounds of the batter on the trays. Cookies spread whilst baking, so place them a good few centimetres apart.
Place them in the preheated oven for approximately 10-12 minutes. I had difficulty telling when they were done, because they will still be soft when you take them out. However, the edges should just be starting to firm up, a little bit.
Leave them to cool on the trays for a while, then let them cool on a wire rack.
Store in an air-tight container. Mine stuck together, so I have baking paper separating them, and I’m also keeping them in the fridge (it’s super hot here, though, so do what works for you). 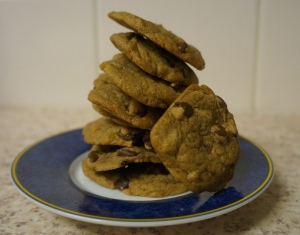